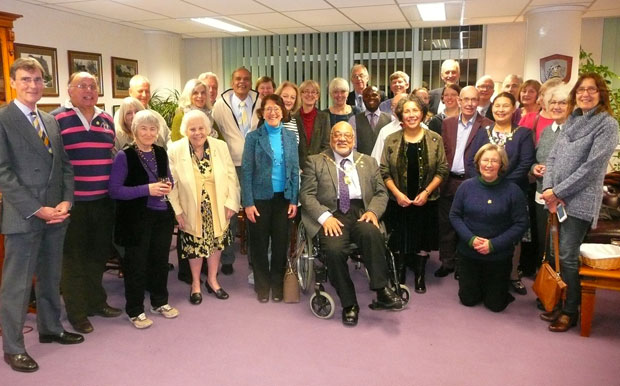 Staff, volunteers and trustees at a reception hosted by Mayor of Merton David Chung in the Mayor’s Parlour in February 2016

Faith in Action Merton Homelessness Project grew from collaboration between local faith groups. We welcome the aid of volunteers and supporters of any and no faith. Our loyal and committed team of about 60 volunteers enable us to run the Homeless Drop-In Centre.

The Homeless Drop-In Centre is managed by a Project Manager and part-time Project Workers. These staff members play a key role in providing advice and support to service users, recruiting and supporting the volunteers, and working hard to maintain and develop constructive links with other local services which complement FiA’s work.

Andy the Project Manager joined Faith in Action in Sept 2008. Andy has a Sports Studies degree and managed a Drop-In at Kaleidoscope in Kingston for 25 years. He has worked in the care profession for over 35 years and has expertise in drugs, alcohol and mental health. Andy uses his experience to create a relaxed and friendly setting in the Merton Homeless Drop-In with the help of the project workers and volunteers.

Angela has been working at the Merton Homeless Drop-In for several years, and has gained her NVQ in Health and Social Care whilst with us. She was previously a volunteer at Merton MIND’s Women’s Group. Angela is an active member of her local church.

Currently about 50 amazing volunteers work at the Drop-In. Some volunteers work in the kitchen and cook the meals. Others have a range of roles including greeting service users, helping with online form-filling, supervising the shower and laundry service, distributing clothing, offering companionship to service users, and joining them in activities such as bingo, chess or table tennis.

The charity is governed by volunteer Trustees from a range of faiths and professional backgrounds. Trustees are also members of the Management Committee.

Grenville Williams (Chair of Trustees) spent his working life in management consultancy and television programme production. He is pleased to be able to assist FiA by using the skills and experience gained during his business career. He became a trustee in 2014 to enable him to contribute to the practical support of some of the most disadvantaged people in society. Grenville is a member of St Mary’s Church Merton.

Judith’s background is social work,  in the voluntary and statutory sectors. A substantial  period of this was in Merton. The latter part of her career was spent helping to educate the next generation of social workers. Judith has volunteered at the Homeless Drop-In for several years and is enjoying the fact that her career has gone full circle – she is again working closely alongside people. Judith is a member of Wimbledon Synagogue.

David Reeves started his career in HR, before moving into Internal Communications via a spell in business management, which included helping to develop the BBC’s online services. After 25 years at the BBC, he became a freelance communications consultant in 2007, and has since worked with a  variety of public and private sector organisations including HMRC, IPSA and Arup.  David is a member of St Mary’s Church Merton.

Pauline Southgate spent the early years of her professional career in IT with IBM, then changed tack to combine work and family as a management and finance accountant for several small businesses importing from the Far East. She has fewer business clients now, and plays an active role as a Governor of Poplar Primary School. Pauline’s experience as Deputy Mayoress of Merton in 2005/6 brought her into contact with a wide cross-section of the voluntary sector, and convinced her of the need for organisations like FiA which reach out to the most vulnerable in our society.

Annette Wicks is the Corps officer of Wimbledon Salvation Army Church and is delighted that the church building is able to host the service users of FIA Homeless Drop-In and to work in closer partnership through becoming a trustee. Annette was previously a nurse for 20 years, mainly in the NHS but also in a Salvation Army Hospital in Zambia before training to become a Salvation Army Officer (minister). Wimbledon is Captain Annette Wicks’s first appointment.

Tweets by Merton Drop In